As the President of the Institute of Chartered Secretaries and Administrators it gives me great pleasure today to present honorary fellowship to Professor Mervyn King. This recognises your outstanding contribution to the governance profession over some four decades since you entered the world of commercial enterprise, having initially practised as an attorney and advocate. 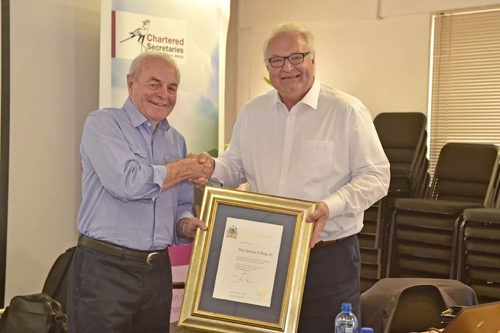 Most famously, you have been the driving force on the King Committee from the very first King Report in 1994, to the most recent in 2016. The King reports have been lauded around the world and have been ground-breaking in their application to organisations in the public and private sectors, both for profit and not for profit.

You also chair the International Integrated Reporting Council. Under your leadership, integrated reporting has spread around the globe. As you have often said, “It is an idea whose time has come”.

As many of you know, Professor King has held many chairmanships, been president of several bodies in the corporate and sporting arena, and has been a director of 8 companies. In addition, you have held 11 honorary memberships of professional and non-governmental organisations, and received 13 national and international awards for your contributions to corporate governance, including the prestigious Ben-Africa Order of the Baobab for your contribution to responsible corporate citizenship. You continue to play an active role in the international arena.

You have been a strong supporter and advocate of our Institute for many years and have spoken at a number of our conferences, including most recently at our Zimbabwean Division’s Excellence in Governance Awards in 2016.

It is my privilege to present honorary fellowship to you here in your home country of South Africa. Your leadership has set the bar higher, challenging the governance profession worldwide to grow and evolve and to grasp the opportunities afforded by good corporate governance, in order to make business better and more accountable to the citizens it serves. ICSA is extremely proud to elect you as an honorary fellow of our Institute.