CGISA Best Practice Guide - The Role of the Company Secretary in State Capture and Corruption: Red flags and Lessons Learned

CGISA has published best practice guides over many years. Although this publication forms part of the best practice guide series, it is ironic calling it a “best” practice guide. The subject matter illustrates very poor practice in that it examines the role of company secretaries in state capture and corruption. It is hoped that by drawing attention to poor examples of corporate governance, we will learn from their mistakes and that we will give greater support to the vast majority of our company secretaries who uphold the values and ideals of our profession on a daily basis.

The Zondo Commission has brought to light serious allegations of corruption and unethical conduct within state-owned entities (“SOEs”), government departments and the private sector. The Commission further revealed the insidiously corrupt and symbiotic relationship that exists between high-profile players in the private and public sectors. Generally, the Commission has heard evidence implicating high-profile individuals in both sectors, and consequently, trust in corporate institutions has been compromised within society. It has
become evident that good governance within these entities has been crippled, making way for grand scale corruption. It is trite legal principle that in every case of corruption there must be a “corrupter” and a “corruptee”, as evidenced by the seminal EOH Holdings Limited (“EOH“) case, discussed in detail herein. This case study, amongst the others detailed in this guide evidence that the private sector is not an innocent by-stander of public sector corruption. In fact, in most instances, the genesis of public sector corruption is the private sector. With company secretaries being trusted advisors and custodians of good governance, the question that arises is what the role of the company secretary in these entities has been under the weight of what has come to be known as state capture. This question becomes more pertinent in view of the observations made by the court in Panorama Developments (Guildford) Ltd v Fidelis Furnishing Fabrics Ltd (1971) 2 QB 711 (CA) that – "...Our courts have held that the Company Secretary is an officer of the company with extensive duties and responsibilities. Far from being a mere scribe, he regularly makes representations and enters contracts on behalf of the company. Company Secretaries are an integral part of an organisation’s management structure and play a pivotal role in the proper governance of the company. The Company Secretary, in effect, acts as the company’s Chief Governance Officer. King IV explicitly states that the board of a company should ensure that it has access to professional and independent guidance on corporate governance and that where a company secretary is appointed, he or she should provide such professional corporate governance services to the governing body. In addition to the governance role, the company secretary is under a statutory mandate under section 88 of the Companies Act 71 of 2008 (“Companies Act” or "the Act”) to provide the directors of the company collectively and individually, with guidance as to their duties, responsibilities, and powers, making the directors aware of any law relevant to or affecting the company and reporting to the board any failure on the part of the company or a director to comply with the memorandum of incorporation or the Companies Act. 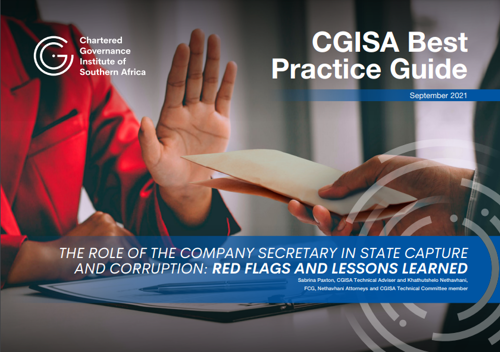