I am delighted that the current Chair of the Thought Leadership Committee (TLC) of The Institute of Chartered Secretaries and Administrators (ICSA), How Yee Loh FCIS (How Yee), has asked me to bring to you the report of the TLC on Minute taking practice – a comparative study which was written up during the time I was Chair of TLC. The report was not released earlier in order to focus on more timesensitive thought leadership papers which were released in July and August 2018.

The nine divisions of ICSA – Australia, Canada, Hong Kong/China, Malaysia, New Zealand, Singapore, Southern Africa, UKRIAT (the United Kingdom, Republic of Ireland & Associated Territories) and Zimbabwe – comprise a network of some 30,000 members. The mandate of the TLC is, as its name suggests, to provide thought leadership on governance issues common to, and with the support of, the divisions for better understanding and promotion of applied governance practices.

I would like to express my gratitude to Peter Swabey, Policy & Research Director of the UKRIAT Division, for putting together the initial research on minute taking and analysing the combined survey results of the seven participating divisions, as well as for writing up this report. I would also like to extend my gratitude to the other TLC members for their work in surveying members in their respective divisions and/or confirming the applicability of this report to their division’s practice; to Judith Fox, former National Director, Policy and Publishing of the Governance Institute of Australia, the Australian Division; and to Samantha Suen, Chief Executive of The Hong Kong Institute of Chartered Secretaries (HKICS), and Mohan Datwani, Senior Director and Head of Technical & Research, HKICS, both of the Hong Kong/China Division; for their kind assistance. I am of course also grateful to How Yee for his leadership of the TLC going forward.

The TLC is on the lookout for other governance topics that would provide ICSA with an edge as ‘the’ governance institute. To the extent that you have any topics you believe to be relevant, please bring these to the attention of your respective division for consideration by the TLC. 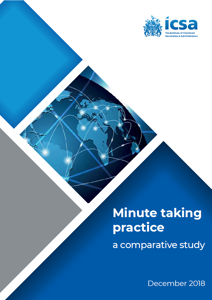